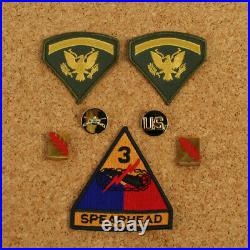 This GI Blues badge set are the same badges worn by Elvis in the film "GI Blues". You can see Elvis wearing these badges on the summer service uniform which is the long sleeved chino shirt.

The GI Blues badge set consists of the following badges. 3rd Armoured Division shoulder patch in full colour with the Spearhead tab below (worn on the left arm only). Specialist 5 rank patches for the sleeves. 1 pair (1 for each arm). 32nd Armoured Regiment metal DI badges x 2 (1 on each epaulet/shoulder strap).

Armoured branch of service for enlisted mans 2 x brass disc, one with "US" letters on the other with a tank and crossed swords on it. These are worn on the shirt collars US on the right collar and the tank on the left collar.

Confusingly when Elvis was in the US Army he served with the 32nd Armoured Regiment of the 3rd Armoured Division which is the same unit in the film "GI Blues" so when searching for pictures you will find Elvis wearing the same badges but with different rank patches on. This is because they are pictures of him when he served in the US Army rather than the his character in the film "GI Blues". He can be found wearing several different rank patches as he had several promotions while serving in the US Army. In the film he only wore the Specialist 5 rank which is the rank in this badge set.

These are quality made badges, the 3rd Armoured shoulder patch and the Armoured branch of service badge are US Army issue badges and the other two are quality replicas that we have had made as the rank is no longer used by the US Army. All the badges are unissued. If you have any questions then please ask. We cater to Re-enactors and collectors of period equipment as well as modern equipment. The item "Replica US Military Presley Elvis GI Blues Badge Set" is in sale since Tuesday, December 10, 2019.

This item is in the category "Collectables\Militaria\1961-1975/ Vietnam War". The seller is "sofmilitary" and is located in Corwen. This item can be shipped worldwide.