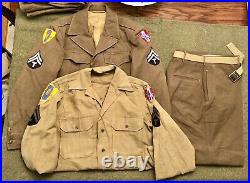 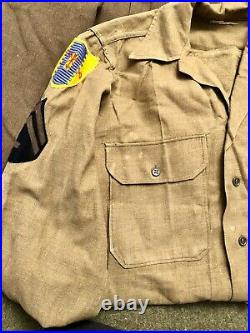 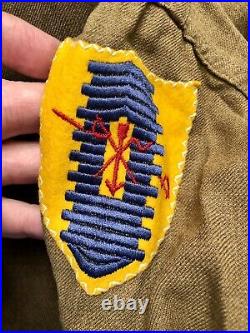 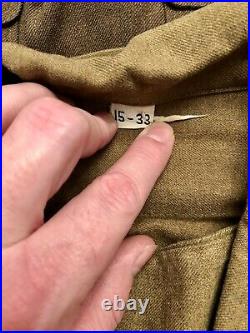 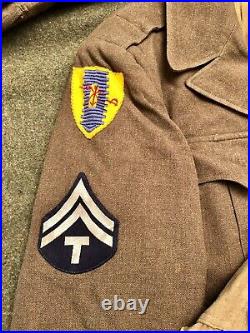 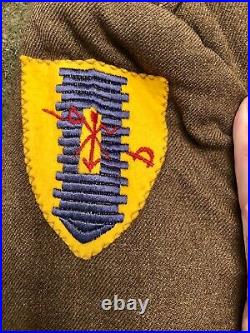 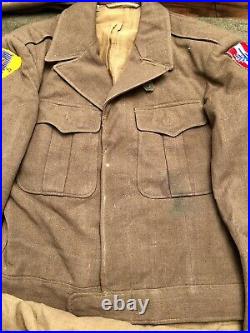 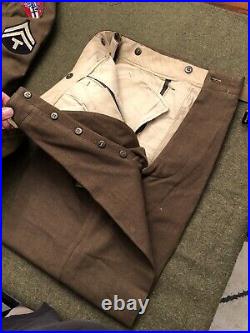 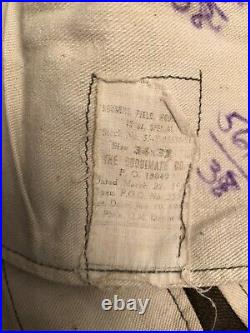 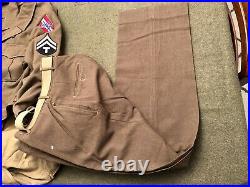 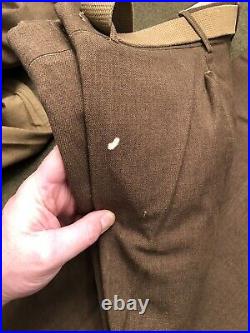 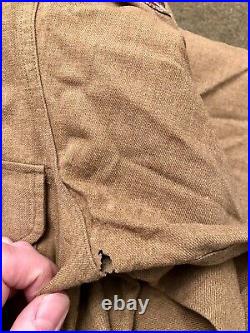 Offered for sale is a nice Scarce WWII US Army 4th Cavalry Regiment Uniform Grouping with theater made embroidery on Wool Patches. The uniform could use a good cleaning as there are stains that look like the should come out. There are a few small moth nips shown in photos that do nothing detract from the uniform with displayed.

In 1939, World War II erupted in Europe, and by 1940, the US Army realized that its armored warfare capabilities were inadequate should war come to America. The 4th Cavalry Regiment was redesignated as a Horse-Mechanized Corps Reconnaissance Regiment. 2nd Squadron was mechanized but 1st Squadron retained its horses until the spring of 1942 when it was mechanized as well. In January 1943, the 4th Cavalry left for the Mojave Desert to begin training for desert warfare in preparation for the fighting in the North African Campaign. [6] Orders were changed, however, and the unit was sent to England to serve as the reconnaissance element for the VII Corps. Arriving on 15 December 1943, they camped at Singleton, West Sussex. The 4th Cavalry's designation was then changed to the 4th Cavalry Group, Mechanized later called the 4th Mechanized Cavalry Group, or MCG. During WWII, the term MCG is synonymous with regiment in regards to cavalry formations. 1st Squadron was renamed the 4th Cavalry Reconnaissance Squadron, Mechanized, and 2nd Squadron was renamed the 24th Cavalry Reconnaissance Squadron, Mechanized. In preparation for the Invasion of Normandy, the 4th MCG was assigned the task of capturing the Îles Saint-Marcouf, 6,000 yards out from Utah Beach in order to neutralize the formidable fortifications the Wehrmacht had erected there. Along with this mission, the 4th was also to land two troops ashore in order to link up with elements of the 82nd Airborne Division and the 101st Airborne Division behind German lines to give the paratroopers armored support. At 0430 on 6 June 1944, elements of A Troop 4th Squadron, and B Troop 24th Squadron landed on the Saint-Marcouf islands.

Kinzie of Troop B (24th) swam ashore armed only with knives to mark the beaches for the landing craft. They became the first seaborne American soldiers to land in France on D-Day. [9] When the invasion began, the troops rapidly captured the islands with no resistance; the Germans had evacuated, but 19 men were killed or wounded due to enemy mines.

On 7 June, just south of Utah Beach, a platoon of Troop B, 4th Squadron, linked up with elements of the 82nd Airborne and managed to ambush a German convoy in a mechanized cavalry charge, causing the enemy to retreat and leave behind 200 casualties. Rough seas prevented C Troop from landing, but they linked up with elements of the 101st on 8 June.

As US forces attacked toward the Cotentin Peninsula, the 4th MCG's two squadrons provided flank security for the 4th Infantry Division and the 9th Infantry Division. Near Cape de la Hague, 4th Squadron fought dismounted in a bloody five-day engagement and captured over 600 prisoners. [7] Both Squadrons were awarded the French Croix de Guerre with Silver Star for their gallantry in the Battle of Cherbourg. After the Battle of Saint-Lô in July 1944, VII Corps began its drive towards Paris, and the 4th MCG assumed responsibility of covering the Corps' flanks.

Paris was liberated on 24 August 1944, and the 4th crossed the Seine River the next day, and the Marne River by 31 August. As the men prepared to enter German-occupied Belgium, the 759th Light Tank Battalion, the 635th Tank-Destroyer Battalion (Self-Propelled), and the 87th Armored Field Artillery Battalion were attached to the 4th MCG, giving it the firepower of a light armored brigade. The Group penetrated the Siegfried Line and crossed into Germany on 14 September, but met stiff German resistance in the Battle of Hürtgen Forest. On 16 December 1944, the Wehrmacht launched a major surprise attack on the Allied lines in the Ardennes in what would become known as the Battle of the Bulge. The attack landed on elements of VII Corps as well, and some of the fiercest fighting of the war for the 4th MCG occurred on 1921 December on the edges of the Hürtgen Forest along the Roer River.

[7] Here, the troopers of the 4th MCG were ordered to seize the heavily defended town of Bogheim and the high-ground from the southeast. On the 19th, under a blanket of heavy fog, two troops from the 4th Squadron infiltrated Bogheim undetected and engaged the Germans, but the two other troops coming to support were spotted and engaged in the open as the fog lifted, and took heavy casualties. Despite this, the Germans were driven out of town by the afternoon.

All four troop commanders were casualties, as well as a quarter of all the enlisted men. Nevertheless, the 4th Squadron charged, dismounted, across 200 yards of open field the next morning to capture the nearby high ground.

In the Battle of Bogheim, 4th Squadron had defeated two battle groups of the 947th German Infantry and company of the 6th Parachute Regiment. For its bravery in action despite heavy casualties, the 4th Cavalry Reconnaissance Squadron was awarded a Presidential Unit Citation.

The 24th attempted to retake the town, but its light armor was no match for the heavy German panzers, and the troopers made little progress. On 26 December, reinforced by tanks from the 2nd Armored Division, the 24th drove out the Germans from Humain and halted their advance in that sector. After retaking the ground lost in the Battle of the bulge, Allied forces resumed their drive into Germany. The 4th MCG conducted more screening operations for the VII Corps advance during the closing of the Ruhr Pocket.

As the war in Europe began winding down, the 4th MCG participated in the operation to eliminate a force of 85,000 Germans holding out in the Harz Mountains, and this mission was accomplished on 21 April 1945 with most of the enemy surrendering. The 4th continued advancing and mopped up along the Elbe River, and was in Leipzig on VE Day, 8 May 1945. The item "Scarce WWII US Army 4th Cavalry Regiment Uniform Grouping With Wool Patches" is in sale since Sunday, October 11, 2020.

This item is in the category "Collectibles\Militaria\WW II (1939-45)\Original Period Items\United States\Patches". The seller is "19delta-uav" and is located in Alexandria, Virginia. This item can be shipped worldwide.