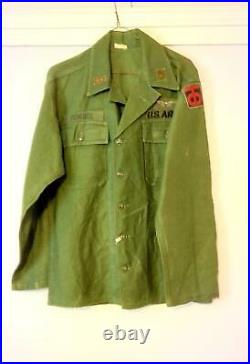 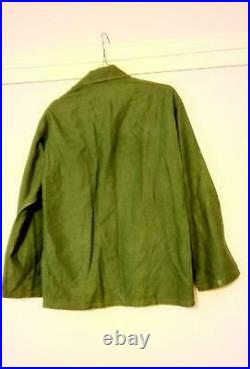 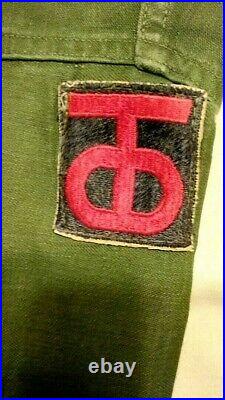 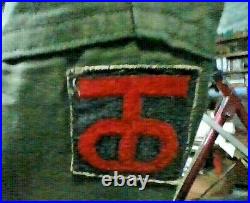 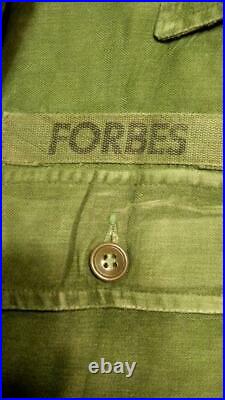 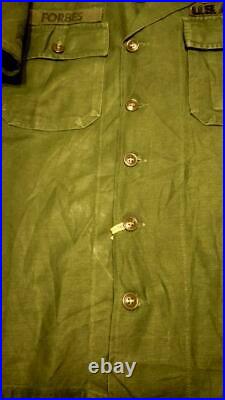 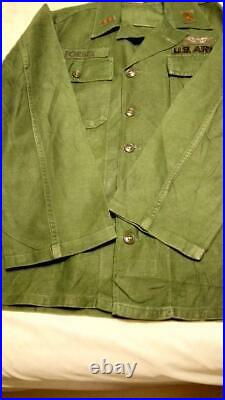 US VIETNAM WAR 1962 DATED WARRANT OFFICER ARMY PILOT OD SHIRT JACKET WITH 90TH DIVISION WWII PATCH AND WITH NAME, FORBES. SEWN CWO2 BAR, SEWN WO EAGLE, SEWN ARMY WINGS, NOTHING MISSING. THE WWII 90TH DIVISION PATCH, ALTHOUGH UNIT WAS DISBANDED AFTER WWII, WAS AUTHORIZED TO BE WORN AFTER WWII BY THOSE WHO SERVED IN THE DIVISION IN WWII. This is a OD Jacket/Shirt of a Vietnam Chief Warrant Officer (CWO2) Helicopter Pilot.

This CWO had prior service in the WWII 90TH Division also known as the "Tough'Ombres'" "Texas' Own, " or the "Alamo" division, and made up of many or mostly Texans, and was therefore authorized to wear the patch. The 90th Division discontinued after WWII and the patch was not used again until the 90th Sustainment Brigade which adopted this patch, but the Sustainment brigades were formed after 2000. Mans cotton sateen shirt type 1 OD green dated 62 in the DSA line on the DSA tag. The shirt bears the warrant eagle sewn on the right collar and the CWO2 rank sewn to the left collar. The shirt bears the name tag "FORBES" over the right pocket and over the left pocket the "US ARMY" tag and above that the sewn Army pilot wings.

The white DSA tag is intact and readable. All is good with all buttons in place and good stitching with no damage. The US warrant officer in Vietnam primarily flew helicopters.

Due to the demand for helicopter pilots in Vietnam, the number of warrant officer pilots grew from about 2,960 in 1966 to more than 12,000 by 1970. In 1962, the Army began an in-depth study and test of the tactical air mobility of organic Army ground forces. These tests proved the air mobility concept and the necessity and value of Warrant Officer pilots. As a result of these tests, the 11th Air Assault was formed. On 1 July 1965, it became the 1st Cavalry Division (Airmobile) and deployed to Vietnam in August.

As more combat units deployed to Vietnam, aviation became more visible and its role in combat were apparent. Warrant officer aviators flew through the heaviest concentrations of enemy fire in the Vietnam War and were involved in every aspect of combat operations.