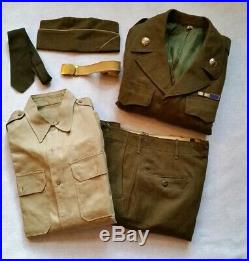 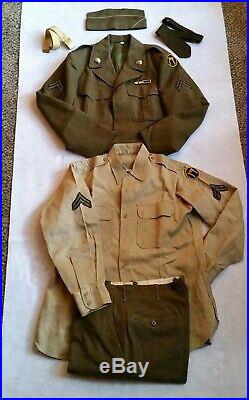 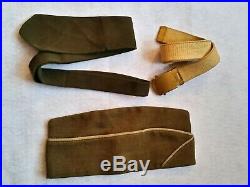 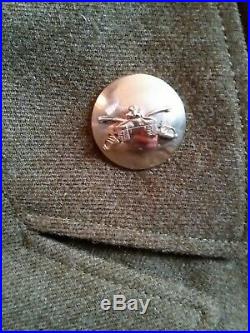 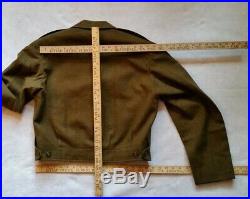 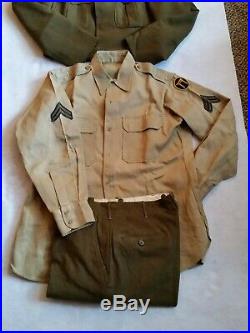 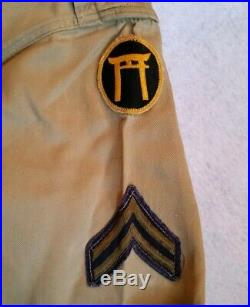 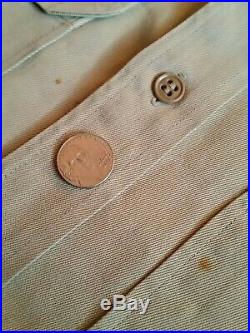 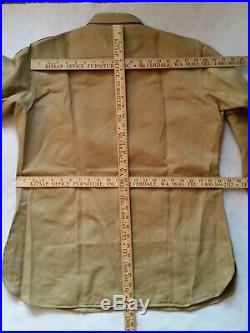 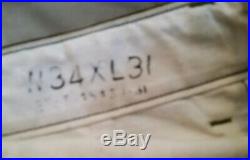 Army WWII/Japan Occupation Corporal Mens Uniform Ike Jacket, Complete Uniform Patches & Insignia. The Torii Gate patch on the Ike Jacket & Shirt was first used in February of 1950 Ryukyu Command, which was the Island area on and around Okinawa Japan, during the Post War occupation of Japan, by the US Military. Since the rank is that of a Corporal, the uniform was likely issued a few years before the posting.

The collar tabs indicate an Armored Division. The uniform is pretty complete. It includes the Ike style jacket, wool pants, khaki shirt, tie, belt & garrison cap. Jacket, pants and cap appear to be a wool blend. See flat lay measurements, which may be more helpful then the original sizes on the labels and stamps, since wool tends to shrink, once wet or washed. The Jacket tag is: 40R. The Pants are stamped W34 x L31.

Condition is really pretty good, considering the uniform is circa 1940/50s, making it about 70 years old. It all shows some wear, from use and storage. The shirt has some age spots, which can be seen in the close up photo. This listing is for a nearly complete uniform (less shoes & underwear) as shown. See photos for style, markings, Insignia and Patches, as well as size and condition.

You will receive the items shown, in the condition shown. The item "US WWIi Army Corporal Mens Uniform Ike Jacket, Complete Uniform Patches Insignia" is in sale since Tuesday, January 28, 2020.