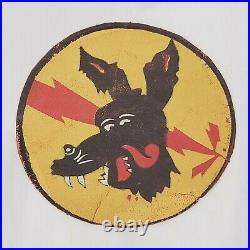 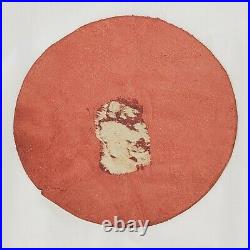 These are actually pretty hard to find. There is one minor small tear at about 5 o'clock in the patch. The squadron was established in June 1942 as a B-17 Flying Fortress heavy bombardment unit; it trained as part of the Second Air Force. It was deployed to the European Theater of Operations (ETO) in September 1942, being assigned to VIII Bomber Command in England. The unit began flying long-range strategic bombardment missions on 17 November 1942 and attacked such targets as submarine pens, docks, harbours, shipyards, motor works and marshalling yards in France, Germany and the Low Countries.

The squadron continued its attacks on enemy cities, manufacturing centers, transportation links and other targets until the German Capitulation in May 1945. After combat missions ended, it moved to St Trond Air Base in Belgium in July 1945 where it conducted photo-mapping and intelligence-gathering flights called Project'Casey Jones' over Europe and North Africa. On 15 December 1945 the squadron moved to Lechfeld Airfield, Germany which it had bombed on 18 March 1944 and now used as an occupation base. The 364th Bomb Squadron was inactivated on December 1946 in Germany. The item "Vtg WW2 US Army 364th Bomber Squadron Air Force Patch fo Bomber Fighter Jacket" is in sale since Sunday, October 10, 2021.