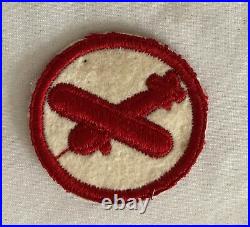 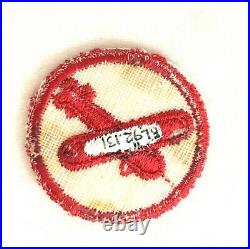 WW II US Army 1st Airborne Taskforce Glider Cap Patch. Photos are part of the description. This World War II patch is from the collection of a teenage boy during WWII. His sister worked in a patch factory in New Jersey and brought home original patches to him.

He placed them in scrapbooks (with the cheap WWII paper that disintegrated). In 1992, the brother brought the collection to me, hundreds of patches. I removed them from the ragged paper, catalogued and dated them. These are unquestionably original and unused.

I have only one of each, no duplicates. There are Army, Army Groups, Corps, Service, Divisions, Navy, Marine, Air Force, Ghost, Cavalry, Special Units, Airborne, etc. Most have some paper residue on the back from the scrap book. I have chosen not to dampen the paper to remove it.

To see all that I have currently listed. It will take some time to do them all, just keep checking back! This item is in the category "Collectibles\Militaria\WW II (1939-45)\Original Period Items\United States\Patches". The seller is "generaljackson1862" and is located in this country: US. This item can be shipped to United States, Canada, United Kingdom, Australia, South Africa, Ireland, Mexico, New Zealand, Singapore, United Arab Emirates, Malaysia.