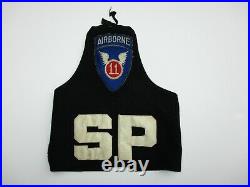 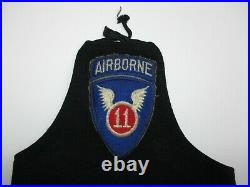 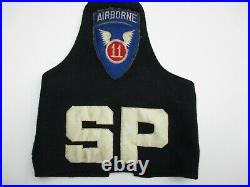 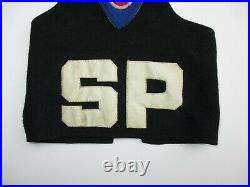 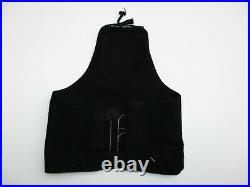 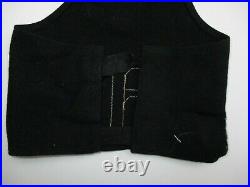 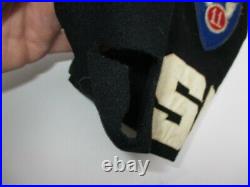 World War II US Army Armband. The unusual armband is for an 11th Airborne Paratrooper featuring an 11th Patch with Tab and sewn on SP. SP stood for guards posted to the notorious Sugamo Prison where Japanese War Criminals were held awaiting trial. You have an original 11th Airborne Patch with attached Airborne Tab sewn to a navy blue black felt Armband. The navy blue/black felt brassard has white SP lettering sewing.

Above the SP is a neatly stoned 11th Airborne Patch. There is a right angle slice as depicted. It is at least 76 years old in fair to about fair plus condition. WWII US Army Airborne Patches, Ovals, Insignia.

Right angle slice to side base of armband, one elasticized band missing, remaining one lost elasticity. Armband measures 8.75 x 7.75 inches, Patch 3.625 x 2.375, SP Letters 2.75 x 2.25 inches. Background: The 11th Airborne provided security for General MacArthur when he landed in Japan and formed the backbone of the occupation forces. The 11th most likely hunted down war criminals and provided guards during the War Crimes trials of Japanese defendants. History: The 11th was the only Paratrooper Division in the Pacific.

The 11th participated in the occupation of Japan. They provided security for MacArthur and most likely hunted down Japanese War Criminals and provided the guards for the infamous Sugamo Prison.

The SP might well stand for Sugamo Prison and was worn by a paratrooper assigned to guarding the top Japanese War Criminals. WWII Campaigns: New Guinea, Southern Philippines, Luzon.