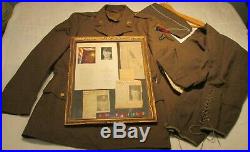 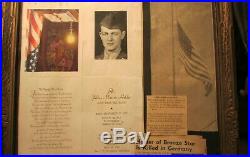 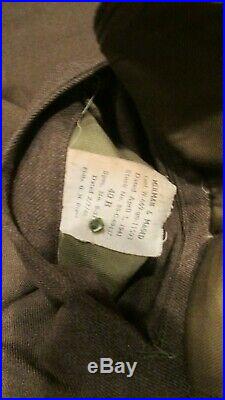 This grouping is named to a true war hero, PFC Julius Marvin Helder, 743rd Tank Battalion (Killed in action Germany March 27th 1945) that I have had in my collection for many years and it is time to pass it on to a new caretaker. Included is a frame that his family member put together with an original program from his funeral, newspaper clipping about his death, a newspaper clipping about his brother 7th Infantry Division Officer Lt. Gerald Helder earning a Bronze Star Medal in Okinawa, poem and flag clipping, and WWII uniform ribbons that appear to have been cut so they would fit under the glass Good Conduct, P.

Tag dated April 1, 1941 Size 40R with 743rd Armored Battalion patch (cut-edge), US & Armored Division collar brass insignia (with correct flat clutch holders) and PFC chevrons (embroidered on black felt). There is also a WWII overseas cap with green and white Armored Division piping (no tag but is around a size 7), and a pair of WWII Cavalry riding trousers which were common to armored division vets to have They have a Q. Tag with no date or size, and the vets name written in the waistband. The uniform jacket does not have any overseas bars or ribbons attached so I assume that the vet passed away before he was able to put his uniform together, and it has been reissued due to other names written inside being scratched out. Also the patch looks to be hand stitched... This grouping is fairly rare because the 743rd Tank Battalion was in the First Wave on the D-Day Assault on Normandy France to support the 116th Infantry Regiment of the 29th Division, and will make an outstanding addition to any collection!

It was redesignated as the 743rd Tank Battalion (Medium) in October 1942. The battalion drew their medium tanks and trained the next year at Camp Young, California and Camp Laguna, Arizona. The 743rd embarked in New York on 17 November 1943 aboard the Aquitania. And arrived at Monrock, Scotland on 25 November 1943. Soon after its arrival in Great Britain, it was again reorganized in a new table of organization, with Companies A, B, and C organized as medium tank companies with M4 Shermans.

When Company D was formed as the light tank company with cadre from the medium tank companies and the 10th Tank Company. The unit took on the combat organization in which it would fight on the Continent and was redesignated as the 743rd Tank Battalion on 2 December 1943. The battalion was selected to be one of the three tank assault battalions that would land with the first wave on D-Day. Companies B and C were selected to receive the amphibious dual drive.

(DD) tanks and began their special training in December 1943. The battalion loaded into their assault craft on 23 June 1944 for the invasion landings. In the early hours of D-Day, 6 June, the three medium tank companies, the headquarters tank section, and the assault gun platoon launched in their LCTs.

However, given the rough seas, the battalion commander decided not to launch the DD tanks into the water and all were brought directly ashore aboard the LCTs. The tanks supported the 116th Infantry.

Combat Team of the 29th Infantry Division. The first tanks, from Company C, arrived on the beach at H-6: 4 minutes late, but ahead of the infantry assault forces. Enduring losses from enemy fire, artillery, mines, and even the rough surf, the tanks finally moved off the beach to the vicinity of Vierville-sur-Mer. As a testimony to their heroism on Omaha Beach nine of the battalion's thirteen Distinguished Service Crosses. Awarded during World War II were awarded for actions on 6 June 1944.

The battalion was among those bombed by friendly aircraft which dropped their bombs short of the intended targets. Although casualties were light inside their armored vehicles, the accompanying dismounted infantry suffered much heavier losses. Having begun the assault that created the breakout from Normandy, the battalion's pace quickened and, on 1920 August, road marched 123 miles in 18 hours. By 3 September they had reached Belgium, on 12 September had crossed into The Netherlands and within another week were even across the German border.

Siegfried Line and Battle of the Bulge. Taking a brief respite from the dash across France and Belgium to refit and take on fuel, in October 1944 the battalion was again engaged in bitter fighting on the Siegfried Line. To the north of Aachen. Fighting continued until the end of November when offensive operations were halted in preparation for a new assault to cross the Roer River.

As the battalion caught its breath and recovered from the fighting, the offensive preparations were halted when the Germans counterattacked in the Ardennes on 16 December 1944. On 18 December, the 743rd Tank Battalion withdrew into Belgium to the vicinity of Malmedy. Where they continued to support the 30th Infantry Division, which had also been reoriented to repel the attack. The battalion was primarily engaged by elements of the elite 1st SS Panzer Division.

And in a very confused tactical situation fought a series of hotly contested engagements around Malmedy, Stavelot. Although the situation had stabilized by Christmas, the battalion remained in contact but did not go back on the offensive with the 30th Division until 13 January 1945. Survivors from Bergen-Belsen concentration camp first experience freedom as their abandoned train is liberated by the 743rd Tank Battalion.

The battalion went into 30th Infantry Division reserve from 28 January to 3 February, at which time they road marched back into Germany, passing through Aachen and bivouacking near Röhe. Waiting for the floodwaters of the Roer River to recede, the battalion assaulted across the river on 23 February. On 6 March, the battalion was withdrawn from the line in preparation for crossing the lower Rhine River. Company C of the 736th Tank Battalion. Equipped with DD tanks, was attached to the 743rd, and led the assault across the Rhine on 24 March, with all 17 DD tanks reaching the east bank of the river. Companies A and C of the 743rd followed on Bailey. Rafts, with the remainder of the battalion following across a pontoon bridge the next day. The Germans put up a spirited defense near the crossing, but resistance crumbled by 29 March, and the 743rd began the race across Germany, largely following spearhead advances by the 2nd Armored Division. On 13 April 1945, the battalion liberated 2,141 concentration camp prisoners. From a train abandoned outside the small town of Farsleben. Rail line, about 12 miles (19 km) north of Magdeburg. The train had originated at Bergen-Belsen concentration camp. And had been intended to bring the prisoners further into Germany where they could be exterminated before the advancing armies could catch up to them. However, the train was overrun by the 743rd Tank Battalion. One M5 light tank, manned by Sgt.

Gross, its crew and eight accompanying infantrymen provided security for the train and its liberated prisoners while the unit scrounged up provisions for them. With the assistance of the 823rd Tank Destroyer Battalion. And other American units, food and lodging for the refugees were obtained from the surrounding German villages.